FacebookTweetPin
Every October my family tries to kill me.
It’s true. It gets worse and worse every year.
Let me back up…a little known fact about me is that I am absolutely terrified of mice and rats.  Especially rats. I find them to be the most vile, horrifying creatures on the planet. I once saw a sewer rat the size of a squirrel walking in the gutter in downtown Chicago at 2am and I was so frozen with terror I literally couldn’t walk or speak. It’s no joke. It’s a down right phobia.
So, if you were the people that loved me the most in the world you would think your reaction would be to protect me from the horror of these rodents at all costs…right? Wrong.
My loving family’s favorite activity is to spend the entire month of October each year planting a fake rat around the house and watching with glee as I pee my pants and scream bloody murder every single time I happen upon it.
This year has been the worst by far.  I even knew it was coming…a couple weeks ago I noticed a charge come across our checking account to a Halloween store from my husband’s debit card. Here we go again…he bought another mother f’ing rat…
I spent a week waiting for it to happen…I was a neurotic, jumpy, cracked out mess of a person.  Just when I kind of let my guard down and figured they must have forgotten about it this year this happened… 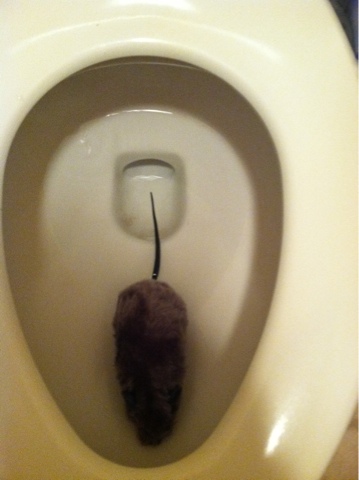 I groggily stumbled into the bathroom at 6 am a few mornings ago, lifted up the toilet to do my business, and found this.
Then proceeded to let out a primal, blood curdling scream that would have given Janet Leigh a run for her money.
The stupid McStupid Faces otherwise known as my husband and children were, of course, waiting with unbridled anticipation for my reaction.  They all died laughing and I spent the rest of the morning trying to bring down my blood pressure and cursing the day all of them were born.
That was three days ago.  I spent the last three days waiting for the Rat Bastard to appear again.  I’ve been so shifty eyed and suspicious you would think I was a paranoid schizophrenic.
Until this morning…when I incoherently, opened up the kitchen cabinet to grab a mug for my coffee and found this staring me in the face. 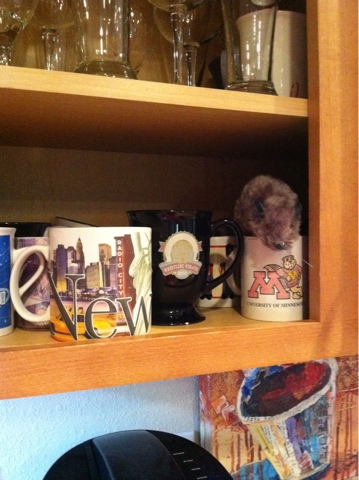 The scream that came out of my mouth this time was subhuman.  I can’t even explain it.
My horrible children were rolling on the floor with laughter and my sad excuse for a husband had his back to me and all I could see were his stupid ass shoulders shaking with fits of silent laughter.  You know, when you’re laughing so hard no sound comes out? Yeah. That’s how hilarious I am to him apparently.
All I can say is homeboy better watch his back. I know this man better than he knows himself…I know all his deepest, darkest fears.
This is war.