FacebookTweetPin
If you happen to be a vegan, vegetarian, or just someone who is even remotely concerned about your overall health you may want to avert your eyes.  I promise though, that if you choose to peak through your fingers at this scrumptiousness, I won’t tell a soul…
It’s been about a week since I’ve gone grocery shopping so supplies were running low around here last night.  It was one of those nights where I was combing through the cabinets trying desperately to come up with something to make for dinner.  There was a huge sale on cheese slices last week and I had a big stock of that so I decided to make homemade Mac and Cheese.
But then…I noticed an unopened package of bacon in the fridge and I had an epiphany…Macaroni and Cheese should have bacon in it! Because you know, there’s not nearly enough fat and sodium in macaroni and cheese.  And things that are already wonderful are just more wonderful when you add bacon, right?.  Duh.
Don’t you feel delightfully naughty already?  I know I do. And I’m bringing you all down with me!  I’m such a bad ass…let’s do this, shall we? 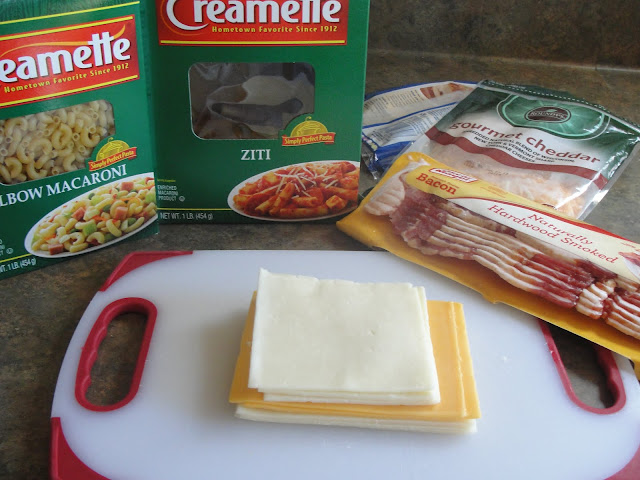 So, this is like, half of the necessary ingredients. Whatever.  I tried.  (I told you I was bad ass). 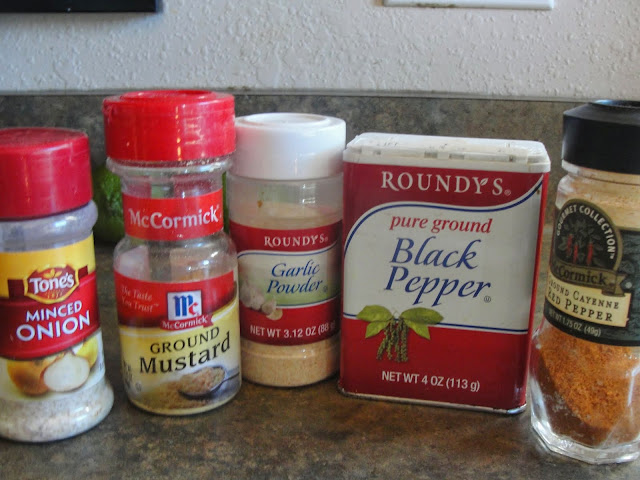 We’ll also need these seasonings a little bit later.  Among other things.  But, I’ll get to that.  Welcome to my disorganized mind, please try and keep up.
But first, you set a large pot of lightly salted water to boil. Then add in a total of one pound of pasta.  I like to just use up what I have on hand and make Mac and Cheese with a variety of pasta shapes.  Today I used half Ziti and half traditional Elbow Macaroni﻿.  You’ll want to cook that pretty firm (or al dente) since we’ll be baking it later.
While that’s boiling you can fry up the bacon until it’s extra crispy.  I only used half a package because my overwhelming guilt was preventing me from going all in with this recipe.  If you want to use the whole package I definitely won’t judge.  (I’m such an enabler). 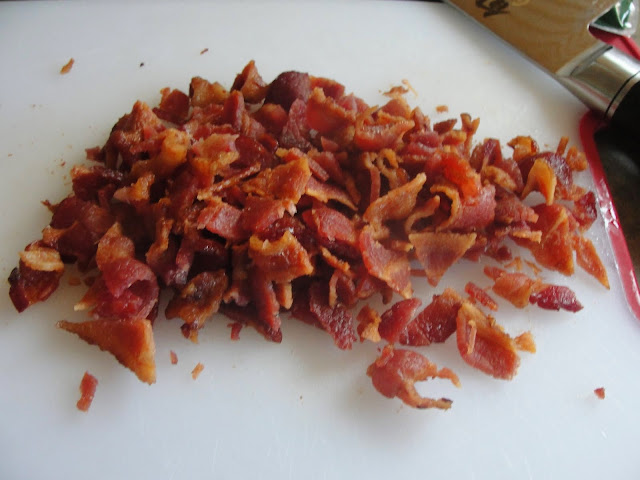 Drain the bacon on paper towels and then chop it up into crumbles, like so.  (It’s probably wise to taste a piece or two at this point, you know, just to make sure it’s fresh.)  Then set it aside for later.  Then sneak one more piece.  Then hide it under a paper towel to try and prevent yourself from eating the whole pile. 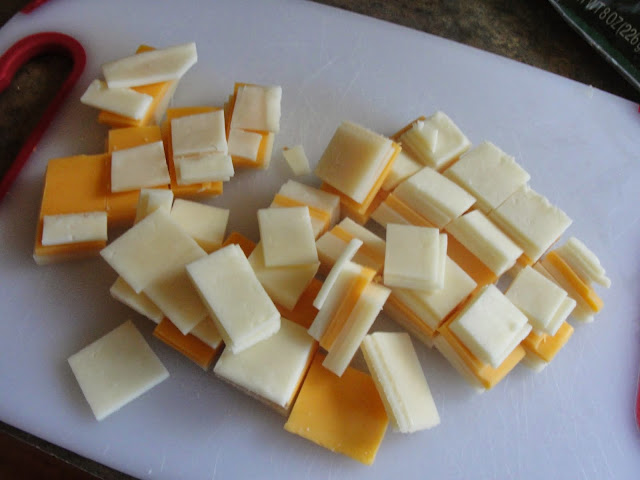 Next, chop up your cheese if it happens to be in slices like mine.  This is a combination of sharp cheddar, swiss, and monterey jack.  I also used up about 4 ounces of shredded cheddar I had left over.  It really doesn’t matter what kind of cheese you use, I think the more varieties the more interesting the flavor. 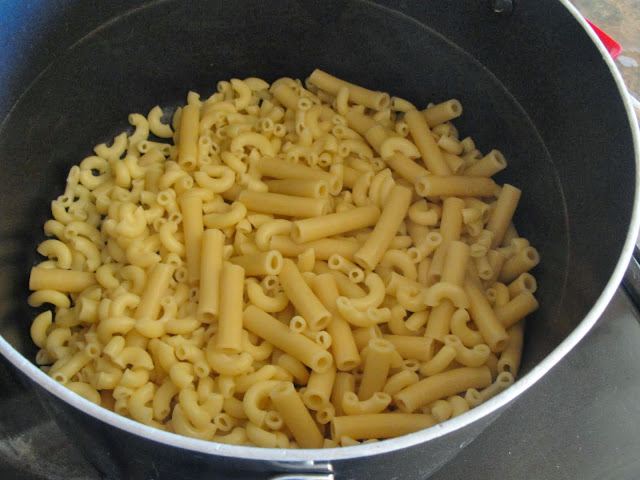 The pasta should be finished by now so drain and rinse that and return it to the pan until the cheese sauce is ready. 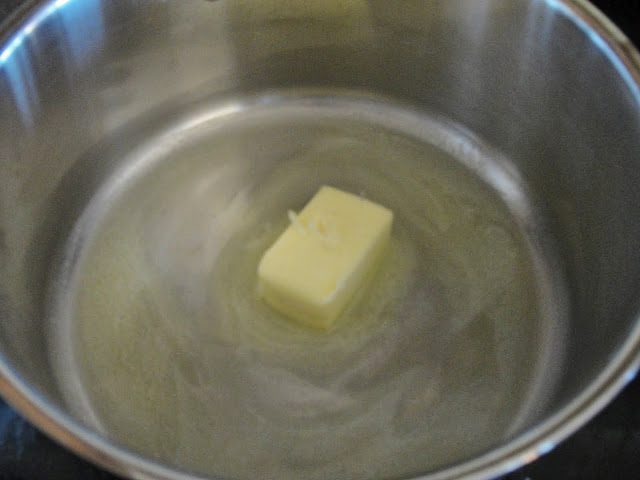 ﻿
Start by melting a couple of tablespoons of butter in a large sauce pan on medium heat. 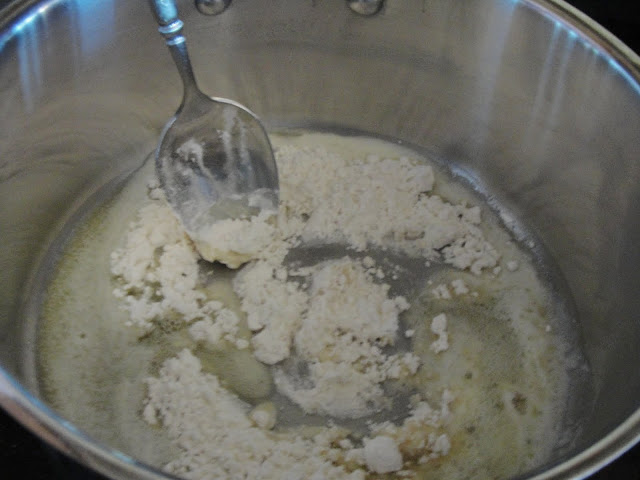 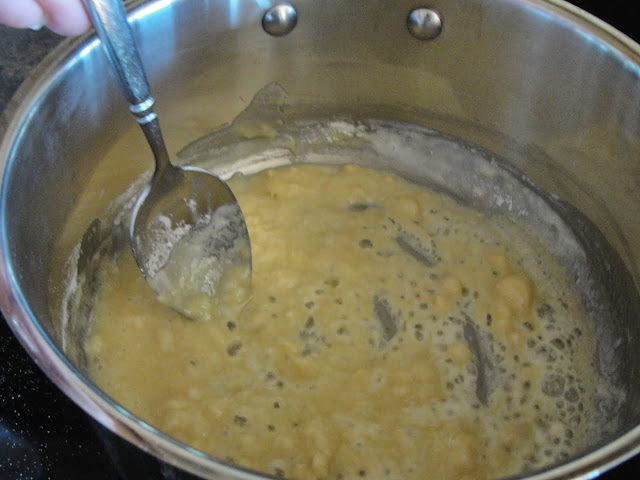 Stir it around for a few seconds until it forms a paste, otherwise known as a roux.  I remember my mom teaching me how to make a roux when I was younger.  She always says “roux” with a heavy french accent even though all the other words in the sentence are said with a regular old Midwestern twang.  Cracks me up every time.  ﻿ 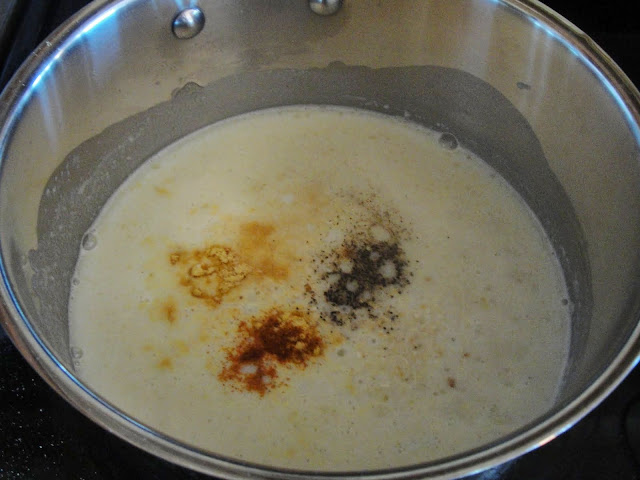 Keep the roux on the heat and pour in about two cups of milk.  Now’s the time to add those seasonings from before as well. 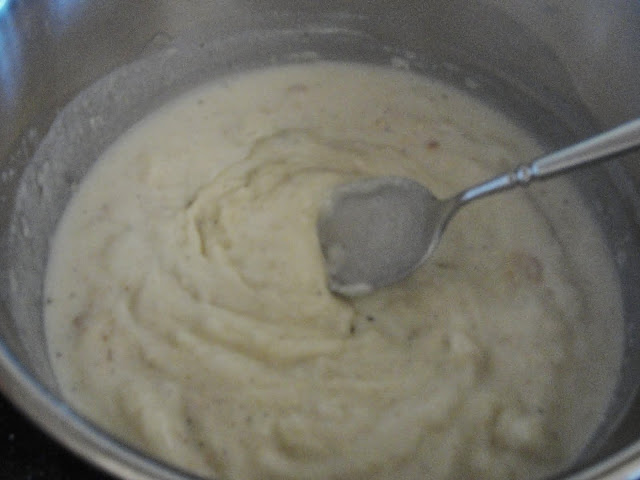 ﻿
Stir constantly for a minute or two until the mixture starts to get thick. 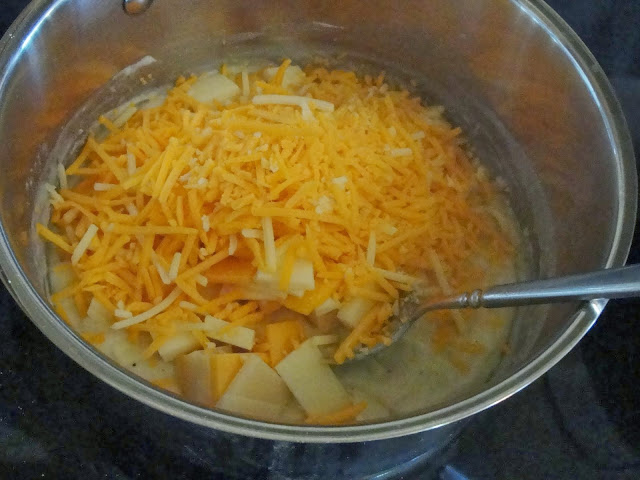 ﻿Now, dump in the cheese! 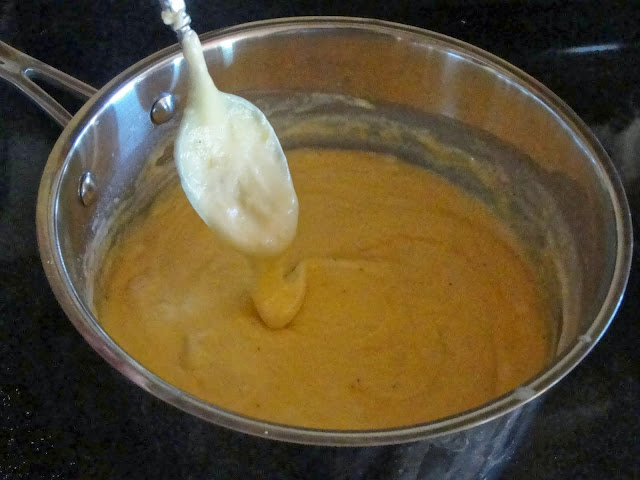 Stir constantly until the cheese melts completely.  If it’s too thick you can add a splash or two of milk until it reaches a saucy consistency. 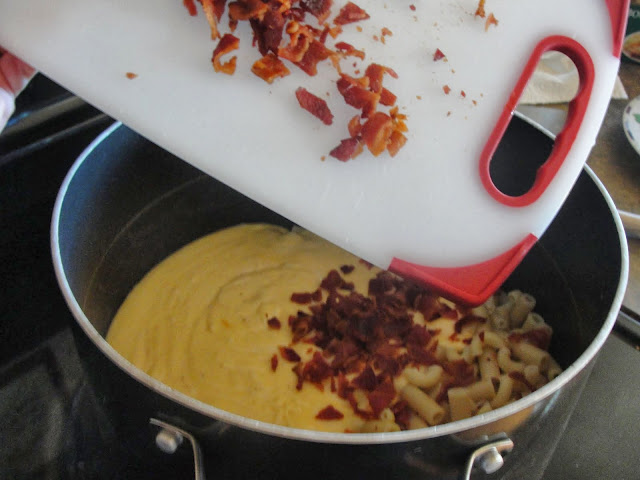 Dump the cheese sauce and the bacon into the pot with the cooked pasta and stir until it’s well combined. 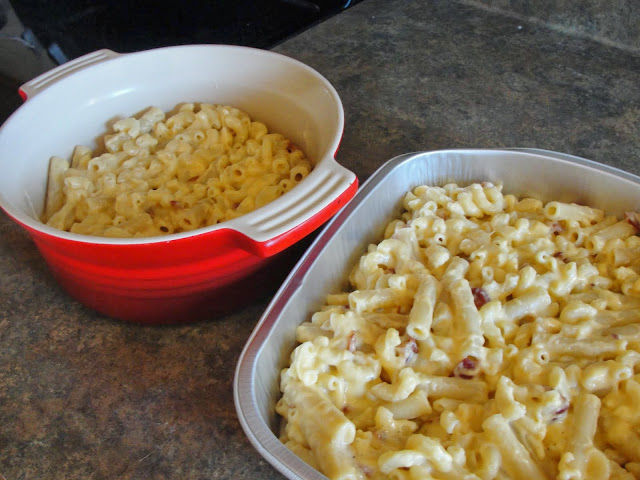 Now, transfer the evil cheesy bacony awesomeness to a lightly greased casserole dish, or two.  I’ve been dividing most of my recipes lately and freezing half.   I’m starting to get a little stockpile of frozen entrees going to make life easier in a few weeks when I go back to work (Gasp! Did I say that out loud? Never mind. We’ll talk about that later,  I can’t go there yet.) 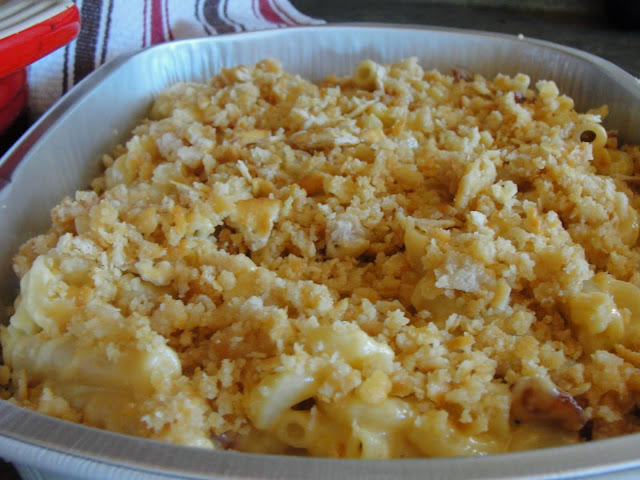 So, my husband walked in the door at this point and general chaos began to ensue so I missed photographing a step or two.  I melted a tablespoon of butter and mixed it with a sleeve of crushed Ritz crackers then proceeded to sprinkle the crumbs on top of the casserole. Cover and pop in a 350 degree oven for about twenty minutes. (Or, you would freeze it at this point if you’re so inclined.) Remove cover and bake for an additional 10 minutes or so until the crackers start to brown. 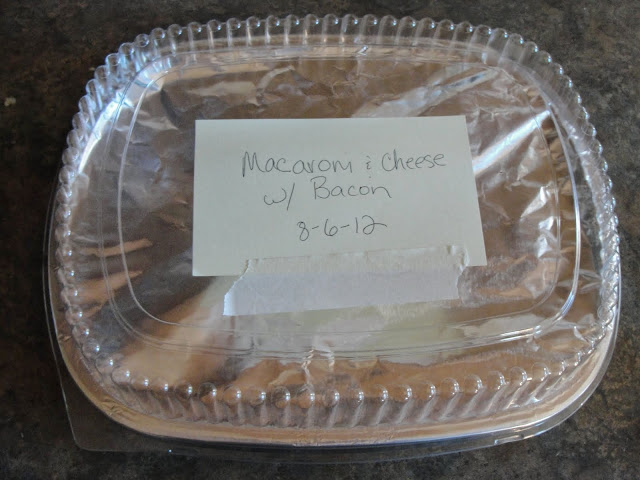 Here’s the half that’s all set to freeze. 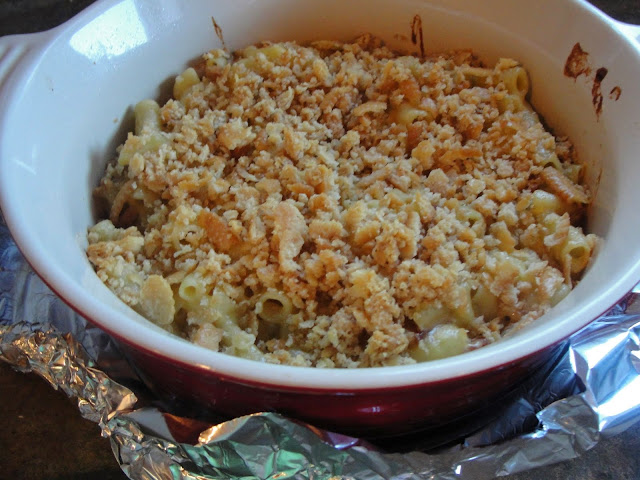 And here’s the half that came out of the oven and was ready to be devoured.  I served this with steamed peas and carrots (I’m not totally devoid of a conscience).  Can I just say…YUM!  It was really, really good.  As most things with 5000 grams of fat per serving are, I suppose. (I actually have no idea what the fat content is and I’d like to stay blissfully ignorant on that little factoid, thanks.)
I was thinking, next time this might be good with the addition of chopped tomatoes or better yet,  chopped sun dried tomatoes!  What do you think?
I’ll add the full recipe to the bottom (and keep in mind I’m not so much of a precise measurer when I cook so these amounts are my best guesses).  I’m off to plan a week’s worth of meals involving tofu and grape nuts to make up for this little extravagance.  Trust me, though…it’s so worth it!
Happy indulgence everyone (insert maniacal laugh here)!
xoxo
Jen
Sinful Macaroni and Cheese With Bacon
1 pound uncooked pasta, any shape
16 ounces of cubed and/or shredded cheese (any variety or combination will do)
8 slices crispy cooked bacon, crumbled
3 Tbsp butter, divided
2 heaping Tbsp flour
2 cups milk (plus a splash or two more as needed)
2 Tbsp ground mustard
1 tsp garlic powder
1 tsp minced onion
1/2 tsp black pepper
1/8 tsp cayenne pepper
1 sleeve buttery crackers (like Ritz), crushed
﻿
FacebookTweetPin

Filling Up My Cup {Again}