I’m back again.  Already.  I know-it’s been less than 24 hours and I’m here posting again.  I can’t help it-I’m all jazzed up about this whole me writing a blog thing and the cathartic-ness of releasing all of the crazy contents of  my head is just so…tantalizing.

I feel a little bit like a psycho overzealous girl that went on one date with a guy and the next day starts planning their wedding and naming their unborn children and calling his mother “mom.”  Or like that annoying chick in high school that chases after you all day long demanding that you sign her yearbook.  “These are memories frozen in time, people!” (Name that movie.  Seriously.  Name it for me cause I can’t remember what movie that’s from.)  But anywho…I have a lot more time on my hands this week since I’m on spring break so I maybe won’t be posting so frequently all the time.  Until summer…then I’ll back again to annoy you frequently. Yay!

What is on my mind this fine morning is coming up with something for me and My Girl to do.  Spring is stubbornly refusing to show itself here in Wisconsin and it is FREEZING outside.  My Girl is begging me to take her outside to play but that would necessitate bundling her up in her winter parka and out of sheer principal, I refuse to do that. It is nearly May for God sakes.

I’m considering taking her to our local children’s museum but the problem with that is that other people bring their kids there too.  Ugh.  I’m in no mood for other people’s children at the moment.  Unless your kids are there.  Then I would love them and find them adorable-but all those other people’s kids and their snotty noses and crazy yelling would make me insane.

There’s also the possibility of going to the mall and engaging in a little retail therapy.  Girly Girl and I could both use a serious spring/summer wardrobe revamping, that’s for sure.  *Sigh*  But that would be less than fiscally responsible of me and I’m really trying to be more fiscally responsible lately.   But I do have a 30% off coupon for Gymboree that’s been burning a hole in my pocket…right now I’m hearing the voice of my darling husband in my head…”Jen, It’s nice that you saved so much money on all those bags of children’s clothing but do you know what would have saved us even more money? Not buying anything at all.”  Rats.

While I ponder over this pressing dilemma, I thought I’d introduce you to one more member of my family.  I imagine I’ll have some things to say about her in the future so you should probably get to know her.  She and I have somewhat of a love/hate relationship.  You can’t help but love her but her behavior is so maddening at times, it’s hard not to kind of hate her.  At least for me.  She’s totally jealous of me and I swear she only pulls the crap she pulls for me.  She’s madly in love with my husband and she sees me as an obstacle to that end.  Sometimes I think she lies awake at night plotting my death.  Okay-that’s a little dramatic, but she definitely plots ways to seriously annoy me.  So here she is: 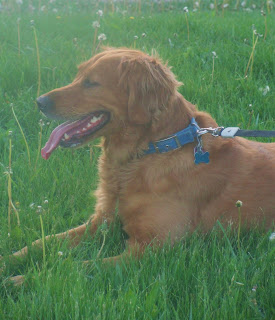 This is Skyler.  AKA “Skee Skee”, AKA “Skeeks.”  She’s our 6 year old (nearly 7) Golden Retriever.  She’s beautiful and almost majestic looking in this picture, isn’t she?  Yeah.  Don’t be fooled.  Okay, I’m kind of kidding.  I do love her.  She and I just missed the window of opportunity to bond.  See, we brought Skeeks home from the farm in October of 2004 when she was just was just 9 or 10 weeks old.  We had 4 weeks or so during which I was in love with her and couldn’t get enough of her.  Then, in November of 2004 I got pregnant with My Boy and our relationship went down hill from there.  Suddenly everything about her made me nauseous.  Her food, her fur, her poop.  I couldn’t take it.  It all came to a head early one morning in the dead of winter when I took her out to go potty before we left for work.  I bent down to pick up her poop and I absolutely lost it.  Literally.  I threw up all over our front lawn.  I wasn’t showing so much yet so I’m pretty sure the neighbors all thought I was a closet drunk A La Meg Ryan in When a Man Loves a Woman.  Cause that’s what I would have thought if I had been watching me out the window that morning.  But maybe not everyone thinks in terms of how something to relates to Meg Ryan  movies the way I do? Anyways…

One more picture of the Skeekster: 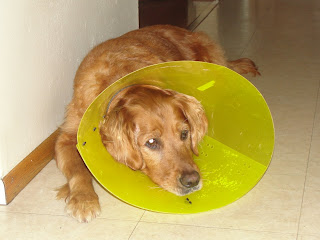 This is Skeeks in her “Cone of Shame.”  One evening I arrived home to find she had spent the day trying to gnaw her own face off.  I walked into trails of blood all over the house.  Poor dog.  You can’t help feel so sorry for her pathetic self in this photo, can you?  Apparently, she just had a minor skin infection that she had scratched violently.  But I swear-she did it just to protest Her Man being out of town that week.

Okay, that’s what I have for you today, my friends.  I have so many ideas of things to say and do on this blog but I will ease you into all that, I think.  I don’t want to totally freak you out…at least right away.

I will leave you with a gratuitous picture of my babies from Easter morning:

And now, I must go and deal with the damn dog.  She has asked to go out for absolutely no reason no less than 4 times since I started this post (I’m not even kidding.)  See what I’m saying?  Hates. Me.
Have a lovely day everyone,
J﻿
﻿﻿
FacebookTweetPin