FacebookTweetPin
I’ve been seeing and reading things in the media lately about the evils of little girls and all things “Princess.” Well, all things pink, sparkly and overtly “femine” in general, I suppose. I’m not sure if this debate is new or if it has always been around and I’m just now tuned into it since I am knee deep in the prime princess years myself with this rather sparkly four year old girl: 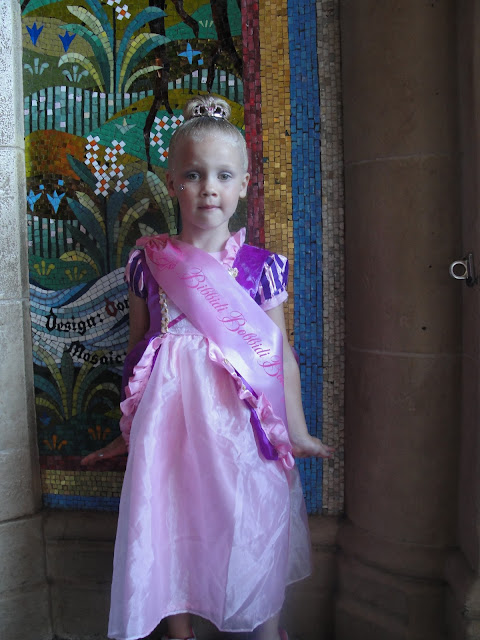 A small part of me feels like I should hang my head in shame, turn in my feminist membership card, and report myself to social services for allowing my innocent child to prance around in this get up. A small part. A much bigger part of me is screaming, “All right every one, SETTLE DOWN.” If my little girl ends up on the pole when she’s 18 it’s not going to be because I let her wear pink frilly dresses and try on my lip gloss when she was 4. It’s just not.
I am in no way suggesting the messages children receive when they are tiny don’t shape who they become as adults. Of course they do. I absolutely do not want to raise a daughter who believes that her looks are more important than her brains or that she can’t do anything boys can do and is destined to passively wait around for her prince to rescue her and make her life meaningful. I don’t want to raise a daughter who believes her choices in all things are limited to whatever it is society deems to be inherently “female.”
I want to raise a daughter who is not afraid to be all of herself at all times in whatever situation she finds herself in. I want her to grow up and become a woman who knows herself. Who knows who she is and is not afraid to be that person, whoever that person is. The thing is, in order for her to discover who this person is she needs to have the opportunity to explore lots of different options including activities that happen to include pink and sparkles.
Not limiting her opportunity to dig in the dirt and build things and study bugs is just as important as not limiting her opportunity to wear pink. She likes pink. Pink makes her happy. She feels fancy and important and beautiful when she wears pink and not because me and the Walt Disney company told her that’s the only way to feel those things but because pink just has that effect on some people and there’s nothing wrong with that.
The reason I know that there’s nothing wrong with that is because those among us touted as the “best parents” are quick to point out how important it is to allow our boys to wear tutus and nail polish in public without judgment lest we damage their sense of self and freedom to express themselves. I’m not saying I disagree, in fact, I wholeheartedly agree with that. So, why is it any different if I allow my daughter to explore her own self directed interests in those things? Pink is not what we should be avoiding-limiting children’s choices based on gender stereotypes is the bigger problem.
As Miss A has already discovered, she likes lots of things and can be lots of things depending on the day. Life is cool like that-it doesn’t force you to be just one thing if you don’t let it. 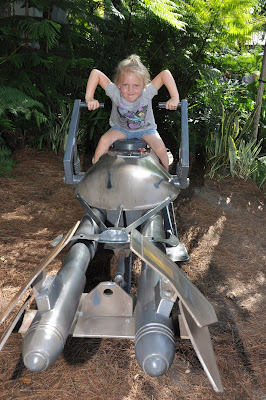 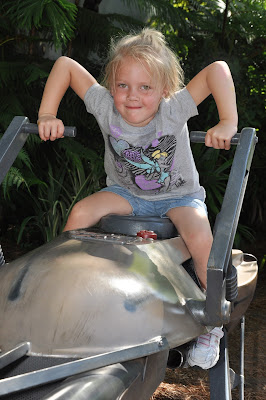 These were taken the day before the princess one above. My “Princess” was also pretty thrilled by getting to pretend she was riding super fast on a Star Wars ship.
To be clear, I’m not oblivious to the deeper issues within all this. The line can become crossed, I think, when pink and sparkly turns into hot and sexy. I get that and guard against that always. The other issue that I touched on is, I think, when a love of princesses gets mixed up with the damsel in distress story line that no one can argue is intertwined in most of the classic fairy tales. That’s where this tricky thing called parenting comes into play. A savvy parent is able to give children the opportunity to explore, use everything as a teachable moment, and to know when there’s no reason to throw the baby out with the bathwater, so to speak.
Here’s what Brenda Chapman, one of the creators of the story behind Brave, Disney’s newest princess movie, has to say about the issue in an article titled, The Plague of the Princess on her blog:

The bottom line is this: Sleeping Beauty is not the most influential woman in my daughter’s life, I am. I am her biggest role model and it is my job to ensure she has every opportunity to grow into the strongest, most well-rounded woman possible. She is going to learn more by watching what I do than she will by listening to what I say (or certainly what a silly animated feature has to say) because I will be there to guide her through all of those messages with my own actions. She is going to grow up watching me do my best to model what it is to be a well-educated, articulate, outspoken, and adventurous woman. I hope she will rarely see me taking crap from anyone, male or female, and I hope that she grows up watching how her father respects (if not always agrees with) my opinions and how he and I have equal power of decision making around here. (And by equal power I mean mostly I’m in charge).
For now, I am having so much fun watching my daughter’s delight in the world. We happen to be in a very sparkly stage but I’m wise enough to know that this phase is going to pass as quickly as all the others…for now, I love that none of her problems are so big that they can’t be solved by a little fairy dust and some tulle. 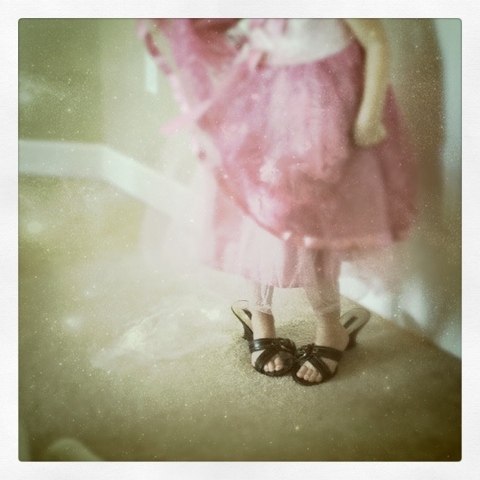 Have a sparkly day everyone,
xoxo
Jen

P.S. I’m linking up to Molly @ Still Being {Molly}’s blog for her YOLO Monday blog hop.  Go check her out!   Here’s a button: