FacebookTweetPin
Mr. Man had the audacity to turn seven earlier this week.  I distinctly remember forbidding him to turn seven last year at this time (you can read about that here) and the little punk went ahead and did it anyway.  I didn’t cry this year…even though my inner Sappy Mama really wanted to what with all the reminders that my baby is gone and this big, stinky, opinionated kid is slowly replacing him that every birthday brings.
Instead, I focused my sentimental energies into creating the best birthday cake ever. Okay, maybe there have been prettier birthday cakes and technically superior birthday cakes but this one was definitely the tastiest one ever.  If I do say so myself.  Which, I just did. So there.
Mr. Man asked for “a huge cake with lots of layers and some are chocolate and some are vanilla with chocolate frosting” and so, I obliged with this bad boy: 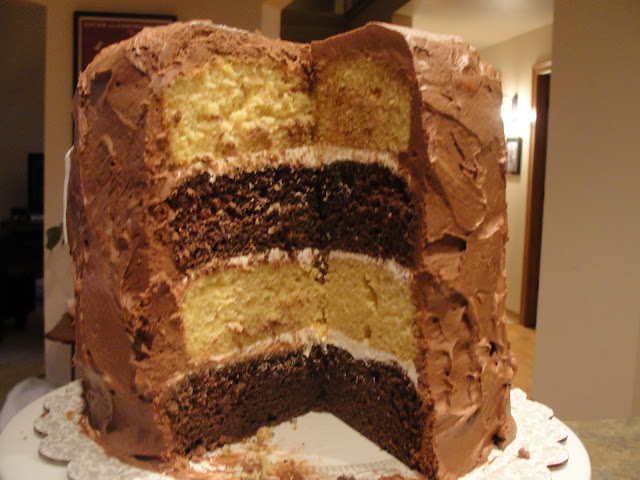 Like I said, technically perfect it was not but delicious…oh, my.  I can’t take credit for the recipe, I actually adapted it from this lovely blogger whose post I discovered on Pinterest (of course-where else does anyone get any information of value these days?).  She made a three layer Neapolitan cake with this recipe, (which I’m exited to try sometime-perhaps this winter for Miss A’s b-day) but I just used the chocolate and vanilla layers.  I followed her recipe exactly only, I used a Pillsbury Pudding in the Mix box mix as the base instead of Duncan Hines.  I don’t think it made a difference.  Here’s the recipe:

Combine dry cake mix, pudding and flour in mixing bowl, then dump in everything else.  Mix on low for 1 min, medium for 2 minutes until well combined.  Prepare a 9″ round cake pan with cooking spray and a piece of parchment paper cut to fit. (I skipped the parchment paper shenanigans).  Bake at 350 degrees for 30 minutes, or until a toothpick comes out clean. 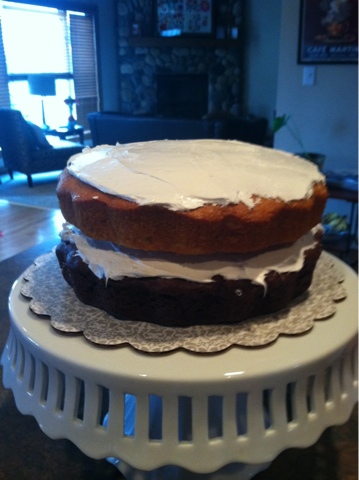 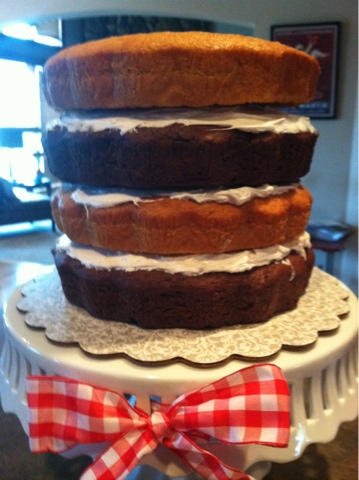 For the chocolate frosting I made a simple Whipped Chocolate Ganache:

Place chips in a bowl and pour heavy cream over the top.  Microwave approximately 90 seconds until chocolate is soft.  Allow to sit for a few minutes until chocolate melts further.  Stir until combined.  Place in fridge to cool for around 30 minutes and then whip with an electric mixer until mixture is fluffy.  It’s important to let it cool enough before whipping or it won’t fluff up the way it should. 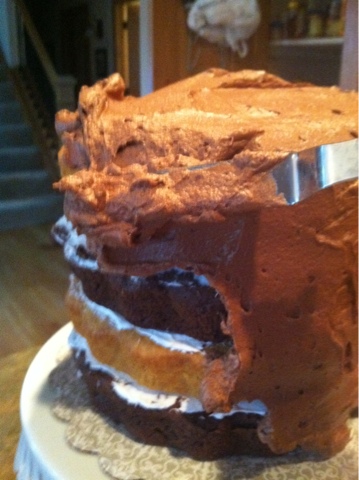 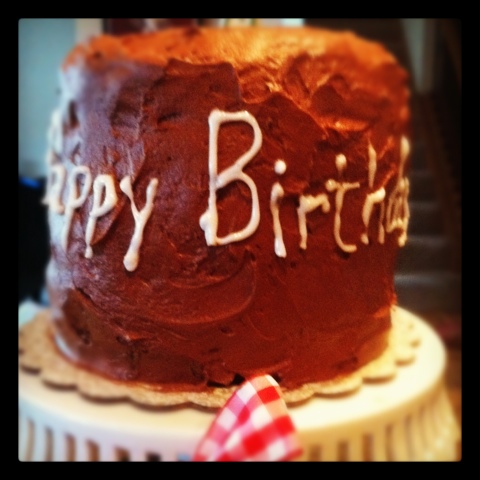 There’s something sort of Shabby Chic/Dr. Seuss about it, isn’t there? 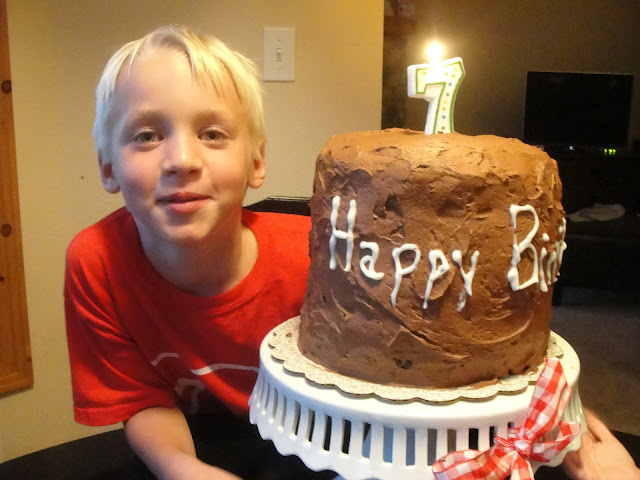 Mr. Man was very impressed, even though it started to lean a bit after transporting it from the counter to the table. It just added to the charm, I think.  Seriously, though-I will never make a cake with any other recipe.  It tasted so, so good!  Unbelievably delicious and moist!
(MommyCAR, are you out there? I know how much you love a moist cake). ;P
These were Mr. Man’s exact words:
“Mom, you should enter this in a cake contest.  It’s like you didn’t actually make this cake, it’s like it just fell down to earth from heaven.”
That’s all my inner Sappy Mama needed to hear…
Go bake this cake, even if you have no birthdays in sight!  Do it.  Do it now.
Happy Baking Everyone,
xoxo
Jen